Posted on 17/09/201406/02/2021 by Cuerdas Pulsadas
We thank Joel López for sharing at Cuerdas Pulsadas the transposition to a current language of “Declaración de la cifra que en este libro se usa” which can be found in the essential book by Antonio Cabezón, “Obras de música para tecla, arpa y vihuela”. For those who do not know Joel in his usual activity in delcamp forum, we can say that Joel will soon finish his studies as a Classical Guitar Teacher in Chaco – Argentina, which he combines with his work for the Chaco Symphony Orchestra as a copyist-archivist For some time and on his own initiative, he began to study Spanish music and culture always from history books and also from literature (El cantar del Cid, El Quijote, El burlador de Sevilla, etc.). … precisely his interest in the Spanish Renaissance led him to delve into this field, using manuals and publications available on the web. Thus, he comments that in Don Quixote he found many words that are currently in disuse, which are nevertheless commonly used in Argentina today and something similar happens with Argentine Folklore, which shares many elements with the Spanish Renaissance. His goal is to help the music of the vihuelistas be better known in his country, and he cites José Miguel Moreno as a reference (after seeing Orphénica lyra’s concert on YouTube is a big fan of her work).   Finally, remember that there is a facsimile version of the complete book in IMSLP < / a>.

(* 1) For the correct use of the figure in this book, it is assumed that whoever wants to read it knows how to sing and knows the signs of music represented in the figure, which are the following:

The first letters come with a wedge:

The treble with a point to the right

If the work exceeds the register of the treble, a quotation mark is used:

If the work is lower than the first notes mentioned above, another wedge is added:

The flats that usually occur on the 4 and 7 are encrypted:

The b is used to indicate that the key before the encrypted note must be pressed. In the case of the harp the previous string and in the vihuela a previous fret or its equivalent on another string. Sharps are marked like this:

The next sign represents the ligature, also used for dotted notes, when seeing the symbol, the key of the encrypted note must be held down before it (keep sounding in the case of the Harp and Vihuela). 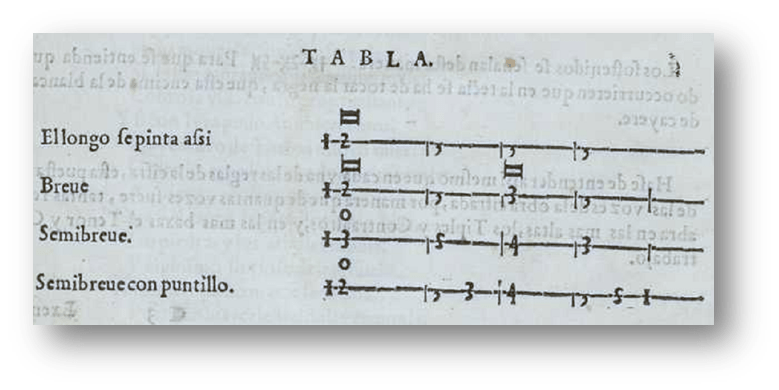 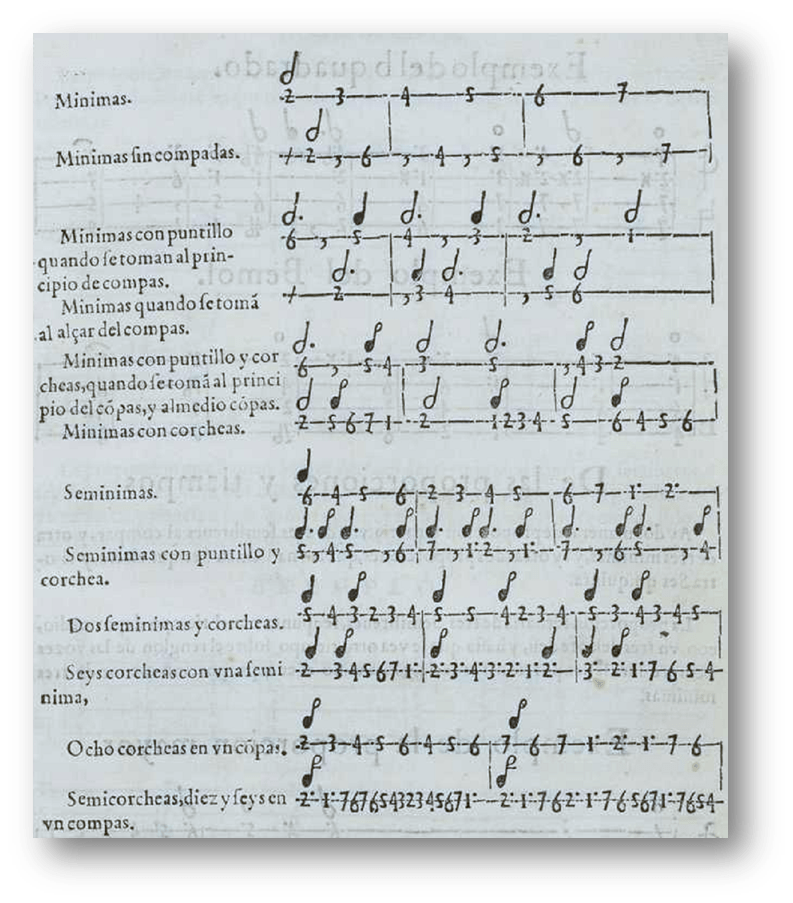 Sometimes there will be so many figures that you can easily get lost, but it is just a matter of paying attention and checking the rhythm. When the work goes by natural, at the beginning the corresponding sign is placed under the compass:

When the work is flat, a B is placed under the measure. In this work, the 4 will be flat, unless the figure indicates:

On the vihuela or harp, on the fret or string do form the semitone. 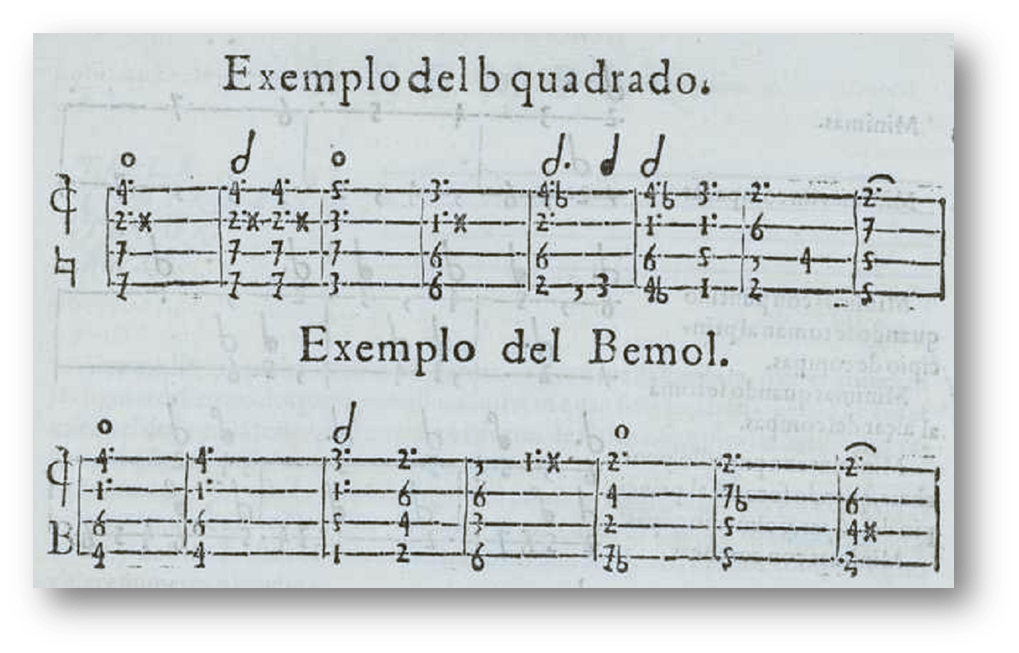 The form they call Sesquialtera, is of three minimums against a semibreve and six semimimimes against two minimums, a 3 is placed under a curve. The time does not change, only the notes under the signs. The Sesquiquinta form consists of five minima per measure, its use is rare. It is encrypted in the same way as the previous one, but with the number 5.

Those who want to read vihuela will see that some voices tend to gloss over, so that one of the voices can be dispensed with and thus everything in the book can be easily read, even more so those who play seven-order vihuela. The harp is similar to the key, what is played on the key can be done on the harp. The curious minstrels can also take advantage of this book, where they will find glosses and compositions of good taste and not very difficult. Those who do not know how to play can start with duets, which are easy and little by little read works with three and four voices without much gloss, until they have looser hands and go for more difficult works.   To go up with the right hand, use the 3rd and 4th fingers and go down with the 3rd and 2nd (counting from the thumb). With the left you go up with the 4th, after going up to the 1st you go back to the 4th. It goes down from the thumb to the 4th and then goes down with the 3rd and 4th. The 6th and 5th in both hands are entered with the 1st and 4th fingers, or 1st and 3rd. The 3rd with the combinations: 4th and 2nd, 1st and 3rd or 2nd and 5th. You should not touch 2 keys with a single finger, whoever reads should strive to play cleanly and without making mistakes, before approaching another work. The fingering of the notes should be adjusted to the capabilities of the player.   The “breaks” are made on the right, with 3rd and 4th and with 2nd and 3rd. On the left with 3rd and 2nd, 2nd and 1st, the top part is broken as fast and short as possible. Warnings (* 2)   (* 1) The old system did not use only letters or only names of notes, it used both forms at the same time and used to add another note that defined the possibility of another way within that sequence of notes. The “Solmization by mutations” is a broad topic and for those who translate, difficult to explain, I can only provide two sources http://www.ums3323.paris-sorbonne.fr/TREMIR/TReMiR_Espagne/11_arte.htm http://www.ums3323.paris-sorbonne.fr/TREMIR/TReMiR_Espagne/07_arte.htm (* 2) The original contains some religious statements before the warnings, which are not very relevant in this theoretical-practical explanation. The reader can turn to the original if it interests him.