Posted on 29/11/201523/08/2020 by Cuerdas Pulsadas
On this occasion, we have the two main protagonists of the project “Waking up sleeping instruments”, the team formed by the violent Carlos Ardura and the musicologist and interpreter Antoni Madueño, with whom we had the pleasure of collaborating from Cuerdas Pulsadas providing strings and frets for the replicas of the sculpted instruments on the front of the Ripoll Monastery. 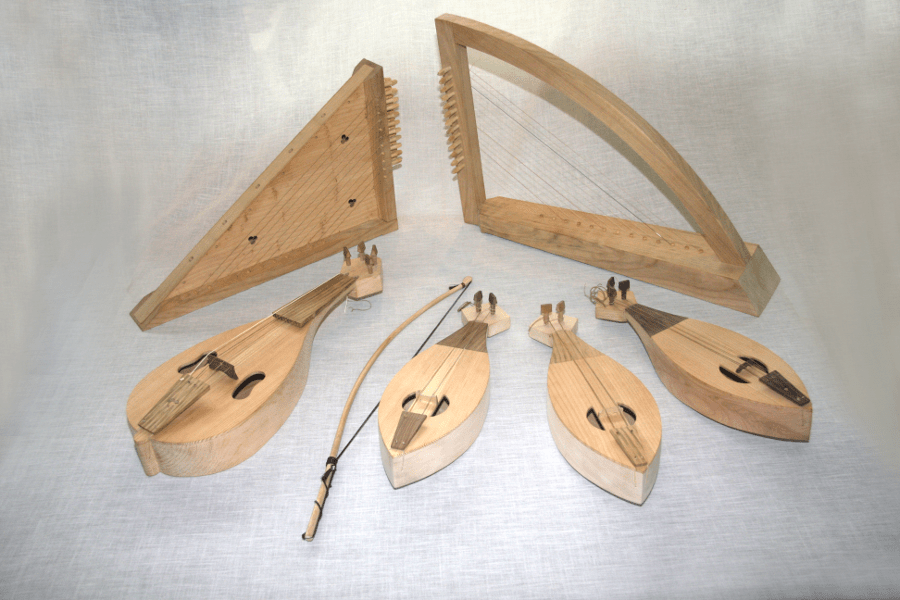 As part of this project, even the process of building these instruments has been opened to the public, complemented by lectures and workshops. More than 1,000 people have followed these activities: students from educational centers in the region, interpreters, medieval music researchers and the general public have accompanied us in this adventure that we now want to continue beyond Ripoll. These reconstructions of unique instruments will be part of a concert and an itinerant exhibition that aim to explain the Front of the Ripoll Monastery (candidate to be a World Heritage Site by UNESCO) and the importance of the medieval culture developed in Catalonia between the centuries X and XIII. 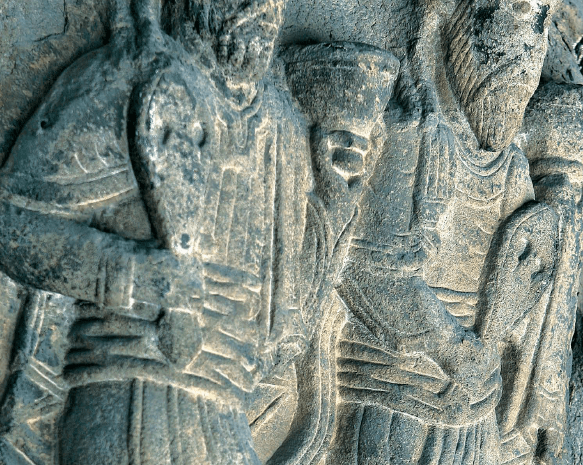 In April 2016 the concert ‘Awakening sleeping instruments’ will take place at the Ripoll Monastery, in which the instruments on the cover will perform a repertoire of medieval music from the region, with the participation of 60 artists, including musicians and singers. As of May, this concert will tour in its reduced version (with 8 outstanding performers), beginning its journey with two performances at the FEMAP – Ancient Music Festival of the Pyrenees.

‘Waking up sleeping instruments’ is the first activity presented by Temps de Joglars , a project of the artistic team and technician of Clus Trobar. Cross-sectional, open in time and space, academic and informative, Temps de Joglars is aimed at the general public and also at specialists. Its objective is the dissemination of the culture of the Middle Ages through artistic, academic and participatory actions, placing special emphasis on the quality of its programming.   Before going to an interview with Carlos and Antoni, we share with you their biographies:

Artist by training and eclectic activity, musicologist and performer dedicated to the medieval repertoire. His performances combine musical practice with scenographies that recreate dreamlike spaces for reflection and feeling. He also gives lectures at academic institutions and universities, illustrated with the exhibition of string instruments and the performance of live music.

Antoni Madueño is a disciple of the tenor Josep Benet, and trained in singing and medieval music with Jordi Noguera and Antoni Rossell. Graduated in Philosophy, he also has a doctorate in Musicology, specializing in medieval secular music. He has dedicated himself to researching the troubadour repertoire and medieval organology, especially the construction of string instruments that he uses in his concerts.

He has performed with various vocal and instrumental formations and also regularly collaborates with other artists in fields such as dance, poetry, visual arts, and medieval music performers. He has performed concerts and solo shows in European countries such as Slovakia, Switzerland and France, and in numerous Spanish cities.

Creator of Temps de Joglars (Jugglers time), a cultural initiative aimed at the dissemination of medieval culture. Within the framework of this project, during 2015 and 2016 he directed the project Waking up sleeping instruments, building replicas of the instruments of the Romanesque Cover of Ripoll.

Linked to music since he was a child, he studied piano and later guitar, which led him to discover the world of early music and, specifically, vihuela. In the year 2000, he built his first vihuela with Carlos González, who will be his teacher and reference, being able to study with teachers of the stature of Jaume Bosser, Daniel Rozada, Carlos Paniagua, Pedro Llopis, Fernando Contra or Ricardo Eichmann, among others.

In 2002 he opened his workshop in a town near his hometown (Valdesoto), combining it with construction courses and working in Daniel Rozada’s workshop for two years.

He studied acoustics applied to luthería with Miguel González, professor at the Superior Conservatory of Oviedo, teaching two courses in the construction of romantic and baroque guitars to Higher Grade students between 2006 to 2008. At the same time, he also teaches instrument construction courses in his Valdesoto workshop.

In 2010 he took a course on the construction of Egyptian and Coptic lutes under the direction of Carlos González and Ricardo Eichmann in Almeria. Since 2011 he has been part of the “La abuela vihuela” project, a pedagogical project developed in Asturias for the dissemination and practice of the vihuela from a very early age, building vihuelas designed for this purpose.

Carlos, Antoni, how did the project “Waking up sleeping instruments” come about? What collaborators have you relied on to carry out the initiative?

[Antoni] Waking up sleeping instruments is the heir to pioneering initiatives such as those of Santiago de Compostela or Puivert. Based on the study of the instruments and their presentation at the 2013 Ripoll Cover International Symposium, I wanted to go further and carry out the recreation in wood of the stone sculptures of the more than forty instruments that appear on the cover Romanesque. My friendship with the violent Asturian Carlos Ardura, his enthusiasm and intense work did the rest. The project was presented to the Ripoll City Council, taking advantage of the momentum of the Unesco Heritage candidacy of the Portada. The timing of the moment and municipal support are being decisive in the development of all activities. We also have the collaboration of other entities and institutions, such as Amics del Romànic de Catalunya, the Eduard Soler Foundation, the Corisa communication group, and companies such as Strings Pulled that have helped us with things as fundamental as instrument strings. The collaboration of the municipality is also essential, from the support to the visits to the workshop, and also the participation in the concert.

[Carlos] It all started when Antoni visited me in the summer of 2014 proposing to be part of the reconstruction of the instruments on the cover of Ripoll, I immediately accepted and set out to collect as much information as possible about the work done previously on this matter (Santiago de Compostela, Moissac, Puibert …). Daniel Rozada made his magnificent library available to us, which allowed us to delve into the subject with a solid base based on iconographic study and historical rigor.

What activities have been carried out throughout the project?

[Antoni] From the beginning we set out the project as an activity of academic and musical rigor, but open to participation. Therefore, after studying the iconography and drawing up the plans, by Carlos Ardura and Constantino Espada, we carried out the construction of the instruments in a space provided by the City Council, which was very open and allowed the public to visit during all the days that the workshop lasted. 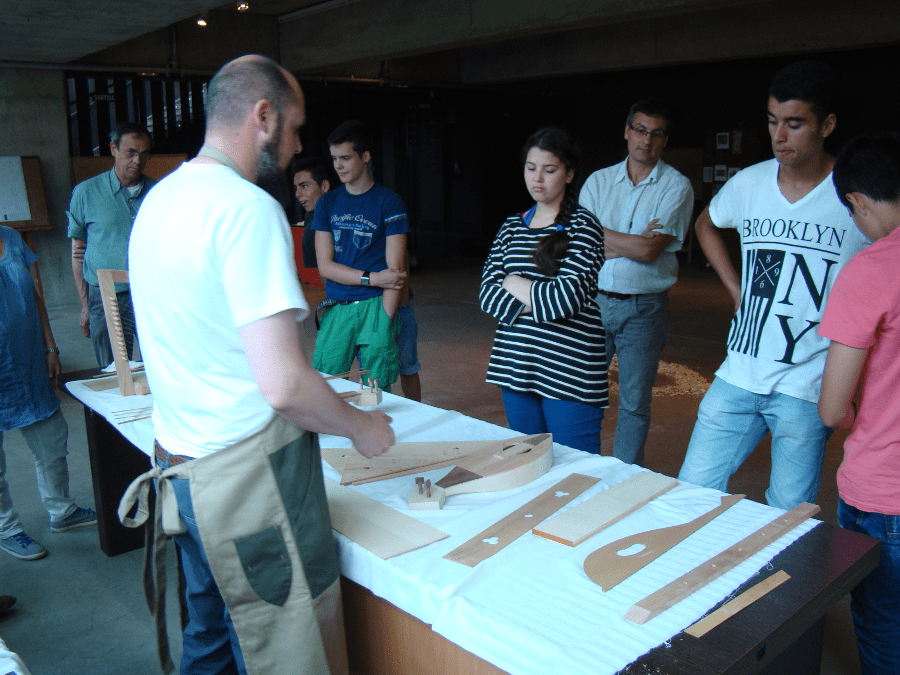 More than a thousand people passed through it, including curious people, educational centers, but also researchers, musicians and people interested in medieval culture. We also had the participation of some students who built the harp, the rattan, the jigs or the viola with us. 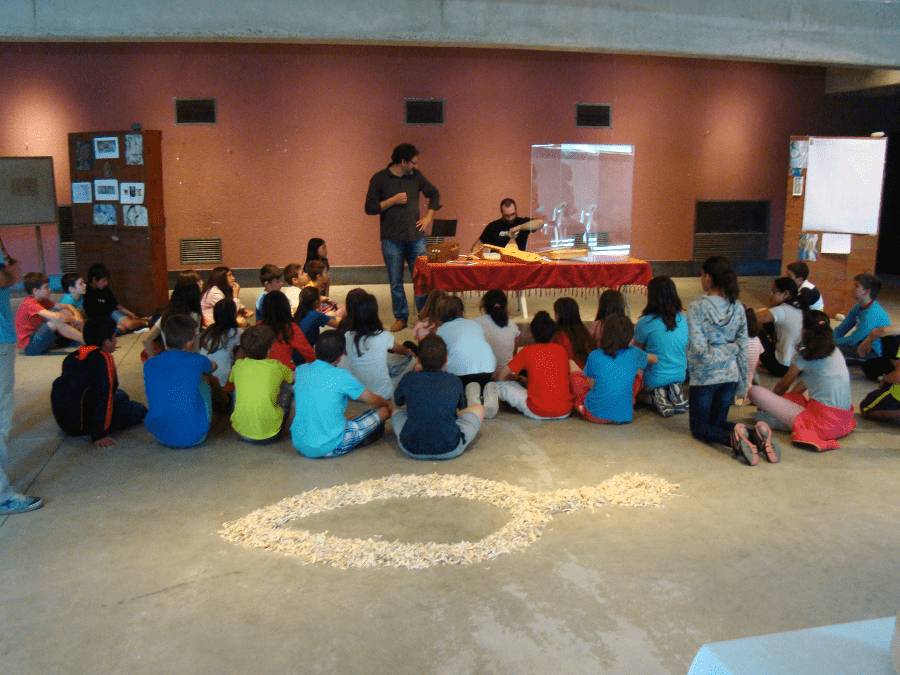 We are already preparing the concert that will take place on April 16, 2016 at the Ripoll monastery, and which we hope will have a great impact. In addition to musicians who will perform the built instruments, the Capella de Santa Maria and the choir of white voices from Ripoll, a centuries-old institution, will participate in it. It will not be the only concert, since we already have at least two more engaged in a festival during the month of July 2016. Finally, an exhibition with the instruments will be held, which can be visited in various places in Spain, and finally it will remain permanently in Ripoll. [Carlos] In March 2015, Constantino Espada became part of the work team, in charge of the realization and design of the plans and the construction of the flute. Using the same key to design all the instruments, as well as golden proportions, vessica piscis, and numerical relationships, we achieve a homogeneous set and a very logical size for later musical practice. 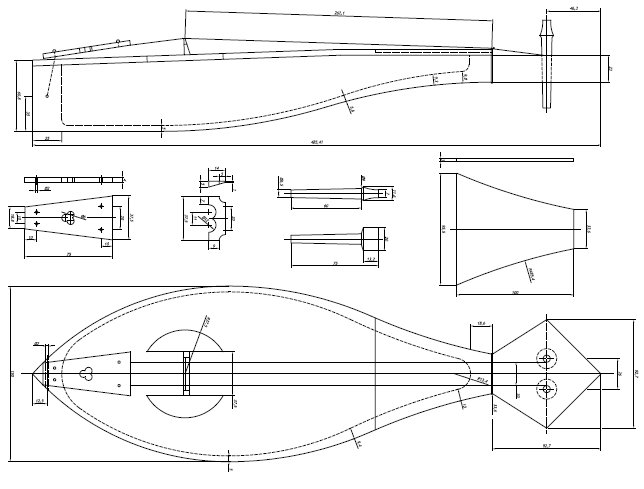 Can you describe the reconstructed instruments for us?

[Carlos] We built a total of 7 instruments: We opted for austere designs due to the deterioration of the instruments carved in the stone and not finding nearby motifs usable as ornamentation. 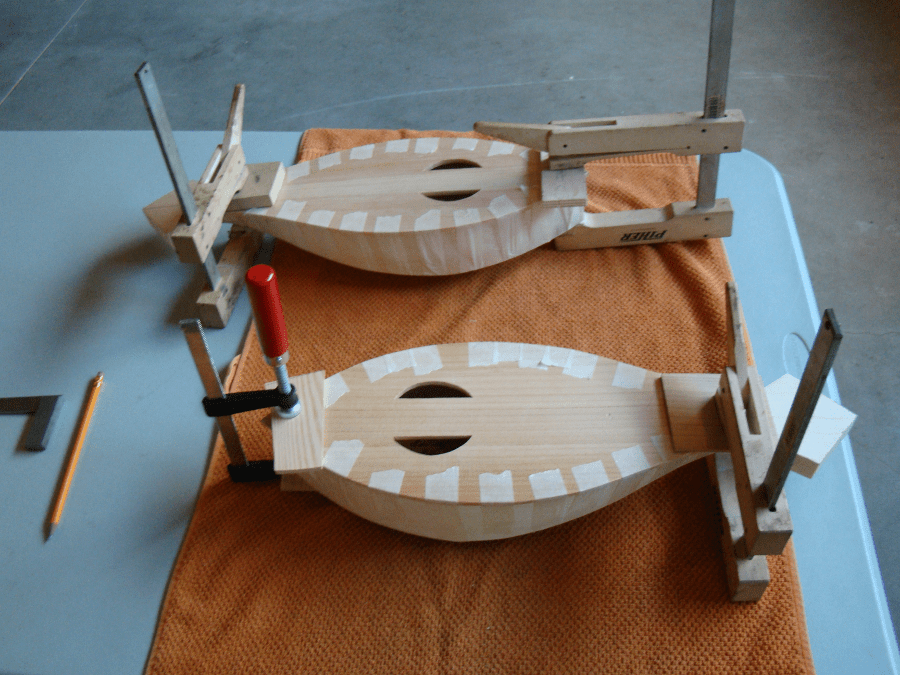 Daniel Rozada gave us a large part of the wood from his stock so that they would be well dry and stabilized. As is logical, we use woods that could exist in the 12th century in the peninsula and Central Europe. All the strings are gut, gut has also been used for the capos on the gigs and viola. The pegs are walnut or pear, and the bridges are maple. For the finishes we use oils or oil-based varnishes. 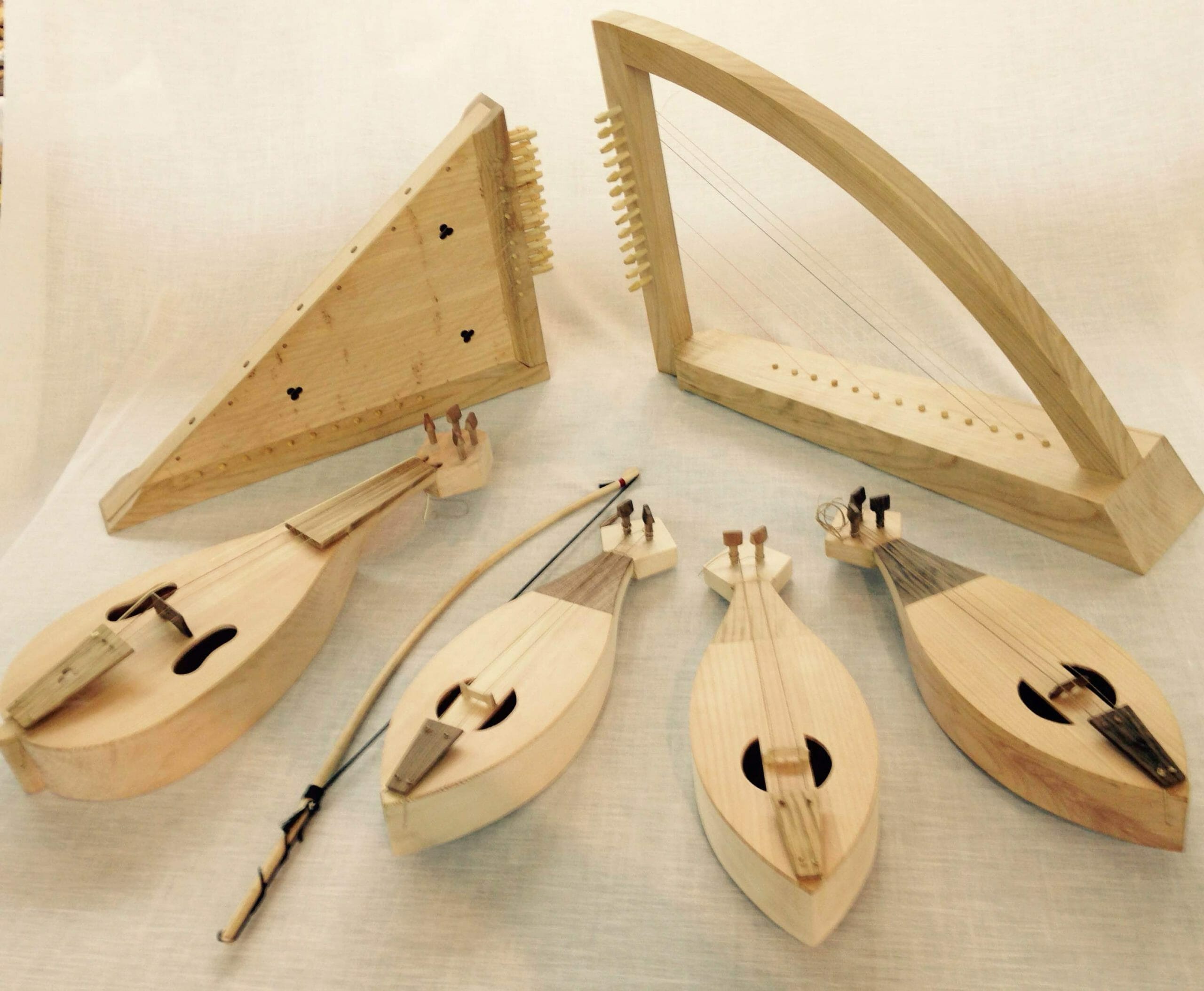 In addition, as we have mentioned, we launched a course for those interested in learning these reconstruction techniques. The didactic part was developed in a space provided by the Ripoll town hall, in the center of the town, where we were able to teach three students monoxylic medieval construction techniques and the rudiments of the trade for three weeks, during which time, numerous visits by schoolchildren and the general public were able to contemplate the reconstruction work of the instruments on the front of the monastery. Personally, it was the most stimulating part and one that I have great memories of.

What challenges have you had to face to complete the initiative?

[Antoni] The recreation of medieval instruments has common problems, whatever the model to be reproduced. In the case of the Ripoll cover, to these difficulties we must add the quality of the execution of the sculptures, in some models, and also the state of conservation of the stone, which in some cases is very problematic. Due to the fact that it is the reproduction of specific instruments, we have worked with eminently iconographic criteria, that is, the identification of the image of the instrument made with the sculptures has prevailed. For this reason, we have sometimes opted for austere designs, for not adding non-existent ornamentation, or for unusual daring morphologies as in the case of the harp.

Thank you for your time and congratulations on the project, it has been a pleasure to collaborate with you.