We are proud to announce the immediate availability of a new type of bass strings developed by Aquila Corde, and we have the best person to talk about it, Mimmo Peruffo.

Aquila Corde was born in the 1990s out of the researches of the string manufacturer (and amateur lute maker and player) Mimmo Peruffo. From his researches in museums across Europe,  he was able to formulate and convincingly establish the theory that ‘loaded’ or impregnated gut strings were used for bass strings on lutes in the 17th century. This solution gave a richness of sound to bass strings at a time when wound metal strings (an innovation of the later 17th century) had not yet been invented. In  1997 Mimmo Peruffo patented and introduced to the market strings of  NYLGUT,  a synthetic material that offers a good substitute for gut on  plucked instruments, greatly improving their performance when compared to nylon strings used until then. 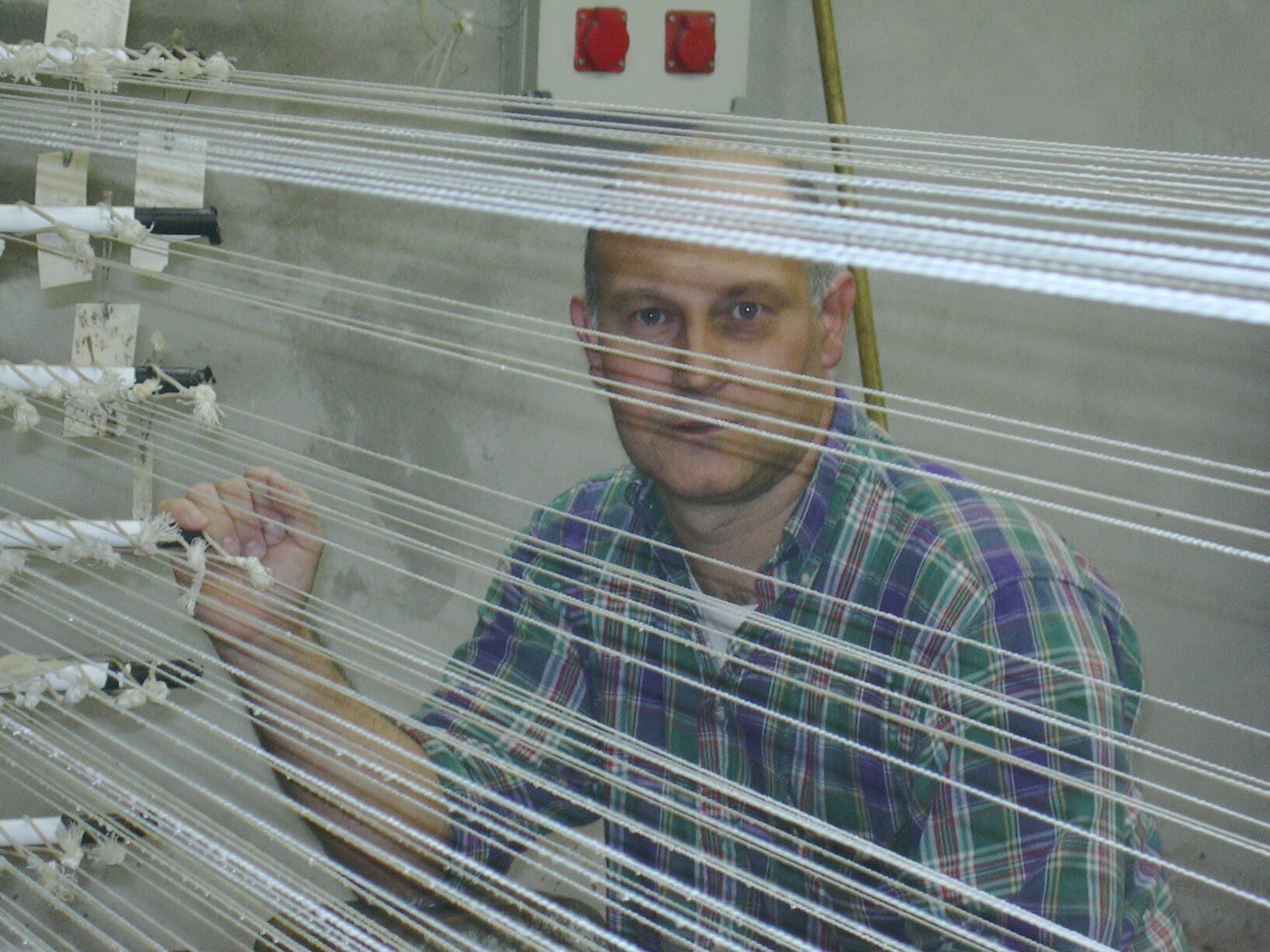 Once upon a time…  a tale of bass strings

The appearing of wound strings caused, starting from the end of the 17th century, the definitive abandoning of the ancient manufacturing techniques of the traditional all-gut bass strings. This explains why modern plain gut strings fail to produce an acceptable acoustical performance in the low registers, thus making it unavoidable to use wound strings for musical repertoires that actually pre-date their historical appearing; this, in turn, causes an obvious philological paradox as well as serious tone and balance problems between high and low registers. A large number of bass stringhole diameters recorded from original Lute bridges dating from the late 16th and 17th century shows that those holes are too small to allow plain gut strings a sufficient working tension at the proper pitch. Musical iconography from the 17th century also shows often bass gut strings of quite different colors from that typical of plain gut, varying from dark red to brown only. Treatises of the time confirm, too, that strings possessed a remarkable duration of sound and acoustical exuberance. Let’s take a look at Harmonie universelle, contenant la théorie et la pratique de la musique, written by Marin Mersenne and published in Paris in 1636. It represented the sum of musical knowledge during his lifetime (available at gallica). Here, Mersenne give us some clues about the sound of the bass strings: 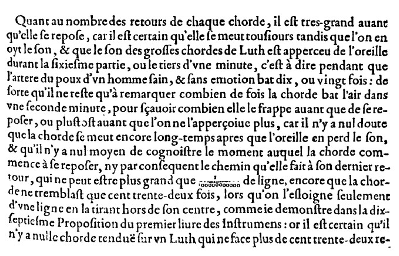 All this suggests an hypothesis: the loading of gut, a technological strategy that we believe employed by the ancient string-makers in order to render the strings to be used in the low registers more sonorous. [notification type=”notification_info” ]More information about sources in “The lute in its historical reality”, research done by Mimmo Peruffo [/notification]

Looking for the red strings

On the treatises where we can trace the “red strings” is Musick’s Monument by Thomas Mace (available at IMLSP), where is is said that: 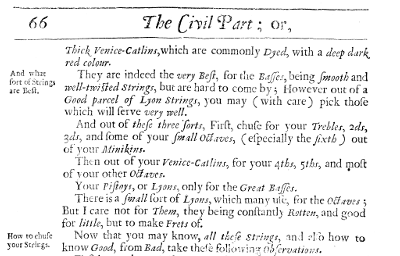 For the lute the bond to old habit remains very strong. Gut bass strings of “… a deep dark red colour …” can be seen in a portrait by the berliner painter A. Pesne (1678-1758) painted around 1740-2 and now in the Schloss Charlottenburg, Berlin, portraying the graceful Eleonore von Kayserling playing a 13 courses German theorbed lute, probably tuned in D minor. 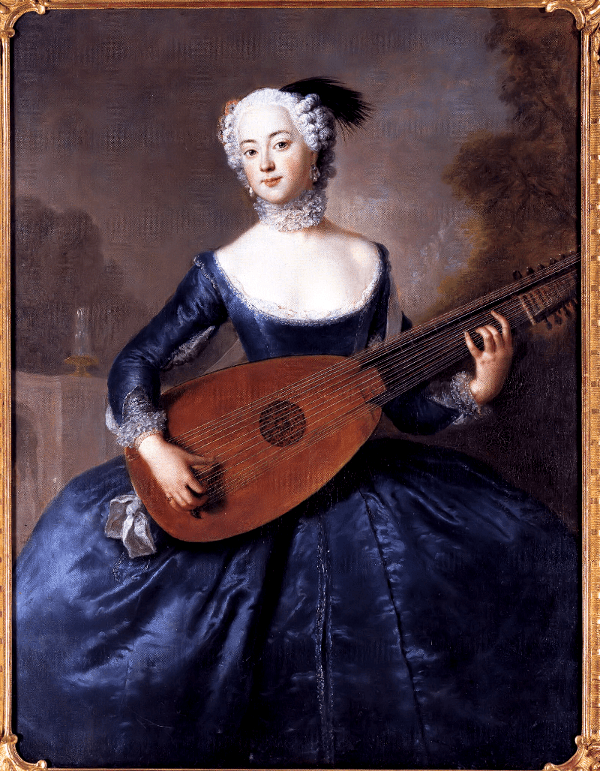 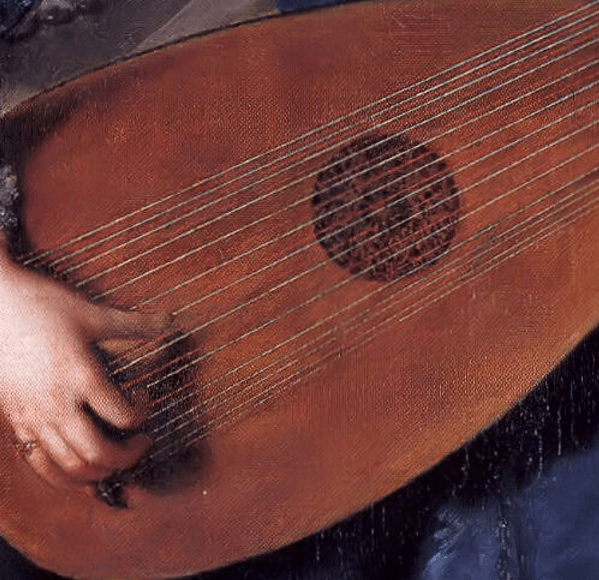 Another perfect example of these red strings can be found on this painting by an anonymous French painter, 1st half of the 17th (Hamburg -Kunsthalle) 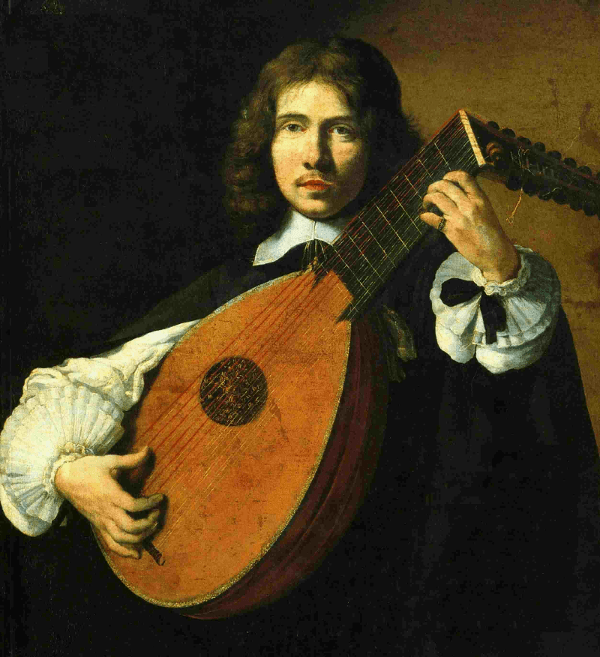 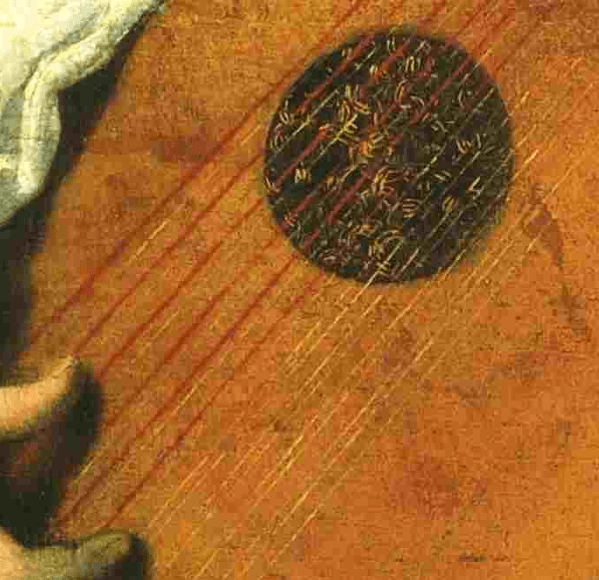 Thus, on the ground of such observations, some of the original instruments examined are from a few decades after the watershed implicitly established by Playford’s announcement. In practical terms the lowest courses’ hole diameters in original instruments bridges were found to be so small as to allow no all-gut string passing through them a sufficient working tension and therefore a sufficient sonority, a sonority moreover only granted to strings possessing a high degree of elasticity such as rope structured ones for instance, since plain gut strings, even at working tension considered correct, proves to be totally unusable.

Ukelele, Guitar or Oud have already benefited from the result of Mimmo’s research at Aquila Corde. We can, for example, find these red strings for the trebles in the Rubino guitar set and, in general, in the so called “Red Series”. 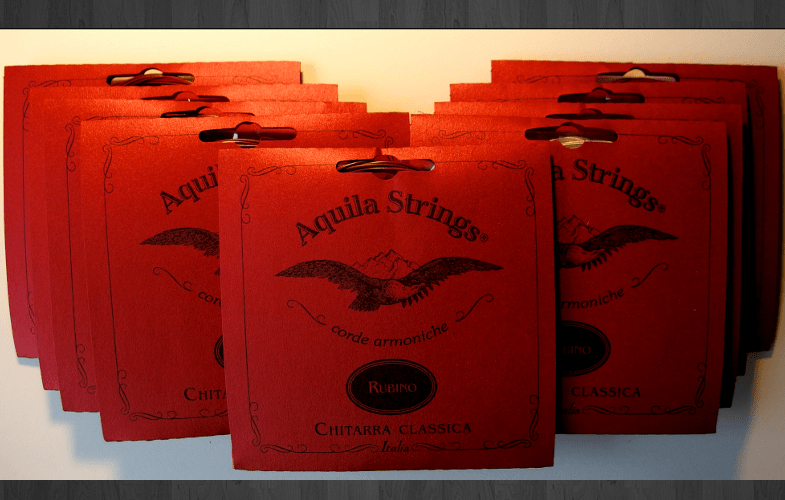 The concept behind these red strings for modern music was taken from that loaded gut lute strings described here: By adjusting the specific weight of the  material for  each  string  without  the  use  of  metal  coating,  a homogeneous  feeling  across  all the strings, is  achieved. 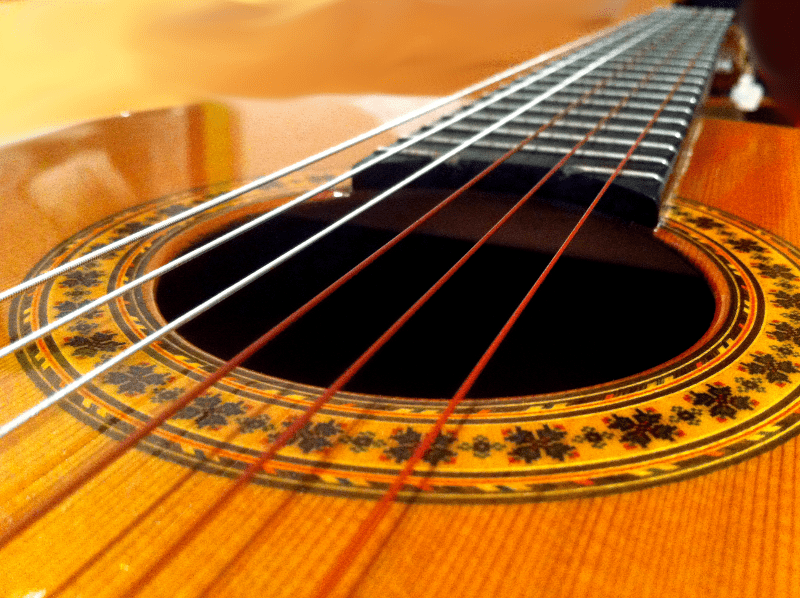 Now, after years of research and proof of concepts, it’s turn to the lutes: 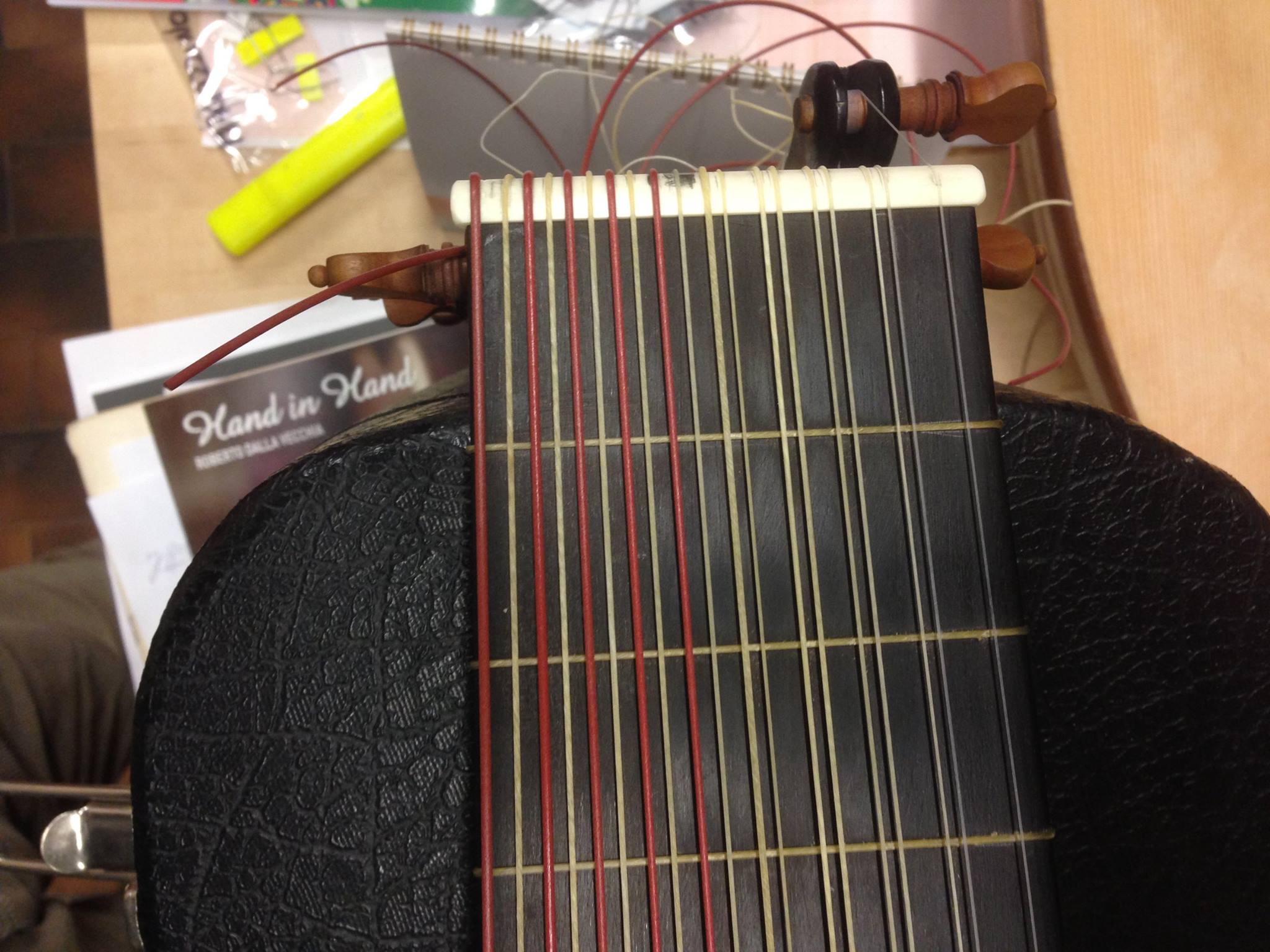 Mimmo, there are many iconographic and bibliographic evidences on the existence of loaded strings or gimped gut, is the purpose of these new strings precisely emulate this kind of strings?

There are evidences of colored strings that can be related to a possible loaded treatment. Especially if the colour is the same on all the basses were today we install wound strings. There are different examples on several paintings: the bass strings has colour varying from deep red (maybe the pistoys basses mentioned by T Mace 1676) to blackish, brown. Dark colours that can related to the heavier substances in use in those times for many things, i.e. metal copper powder, lead  and mercury pigments whose density is up to 8.0 gr/cm3 that it is necessary to react twice density than natural gut. Actually the best clue is the hole diameters on old original bridges in the bass side. By mathematical formula I have calculated a range of density of the old gut basses between 1.7 till 2.3 times more than the density of natural gut. Some historical sources related to the lute described the sound of these basses:  very powerful and that make confusion because they cover the sound of  the upper strings even when installed on a very short extended necks (see T. Mace & Borwell Lute Tutor). These basses I have invented,  are synthetic, and reproduce all what I know (or suppose)  in matter of the old basses (even the colour!): high elasticity, density (twice than gut), raf gut-like surface, dark and powerful sound and, finally, their colour recall the old Pistoys basses of T. Mace. Actually they are not so brilliant than modern wound strings this is why they still need octaves, which are still indispensable here (they are not with the modern wound strings). In matter of the octaves, I remember what Tinctoris and Virdung wrote about them: they are here on the lute to support the poor performances of the basses of those times. However, these new basses are made also for diapason of the liuto ttiorbato style, that has a short extended necks whose problem of basses today was never well solved: modern wound strings are too brilliant, pure gut strings are too dull (even the roped ones). 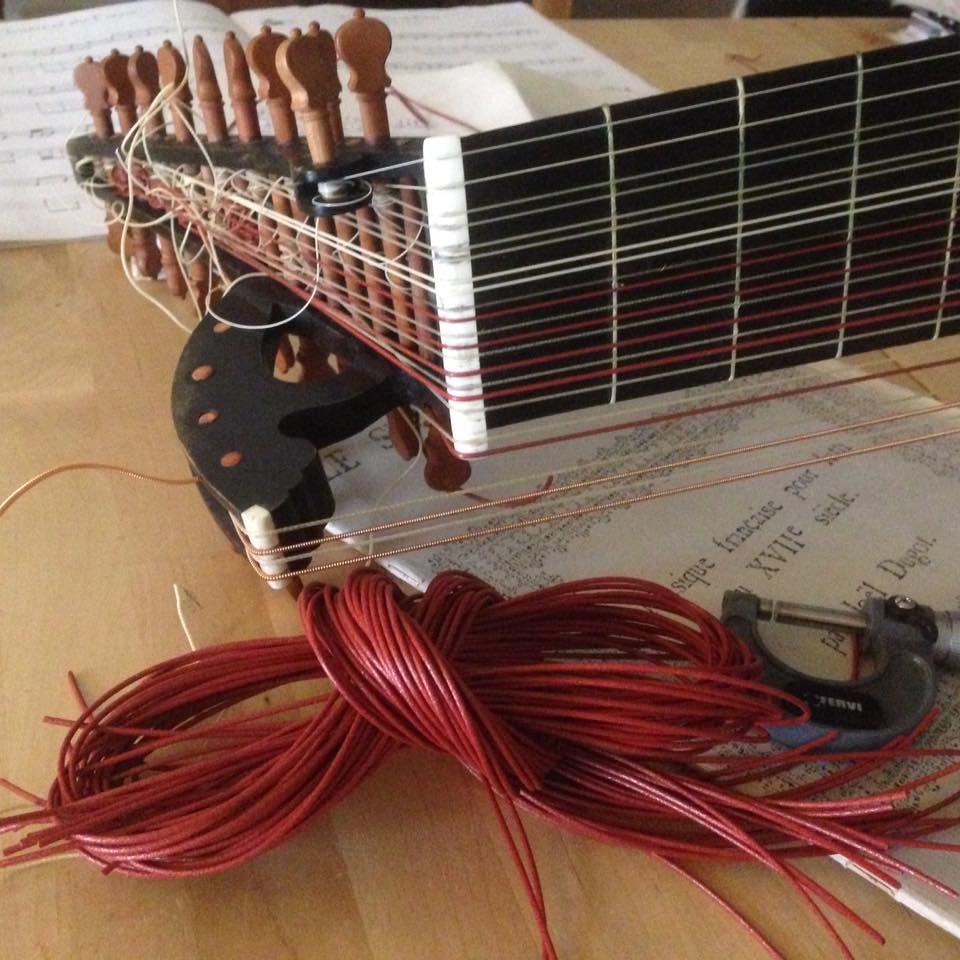 Do you think then that they could be a complete replacement of wounded strings?

It depends on the taste of the player and what he think about the lute. Anyway,  I am pretty sure that many people will be very happy with them. Indeed, we now know that the german 13 course lute has wound strings in those times, however they were totally different from the modern  ones. In practice the sound of these loaded strings is closer to the old wound strings, that were made with gut cores, and even open wound whose density was around twice than gut strings while the modern ones has 5 times density that gut ( this my conclusion is based on some evidences). These loaded strings have also a very high tuning stability. 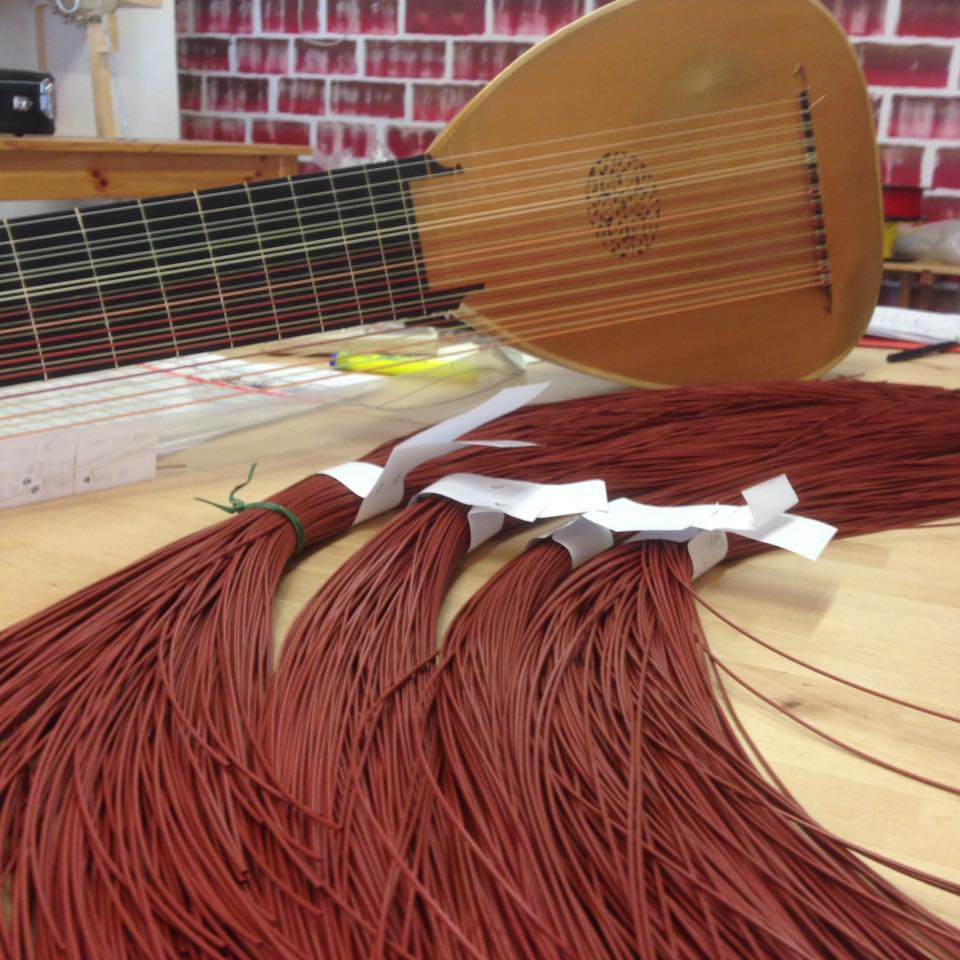 Mimmo, could you describe the main features of these strings? composition, touch, elasticity, flexibility.

Well, this is basically  a synthetic elastomer with medium grade of Shore D (that mean  the gradient of elasticity) that I have taken into consideration over more than 15 different elastomers. I charge it during the extrusion phase with thin copper powder added in a very high quantity. Many extrusion experts told me that I am totally crazy to add this quantity of copper powder because it is surely too much for the plant.  Yes, I have broken a few of expensive  extruder screws; yes, nothing was easy for 4 hard years, a lot of frustration …. but now these new loaded basses do exist. If you do something of new there is always a risk that you must put on your back. If one do not take the risk the better thing is to stay at home seeing the TV. But this is not my life. 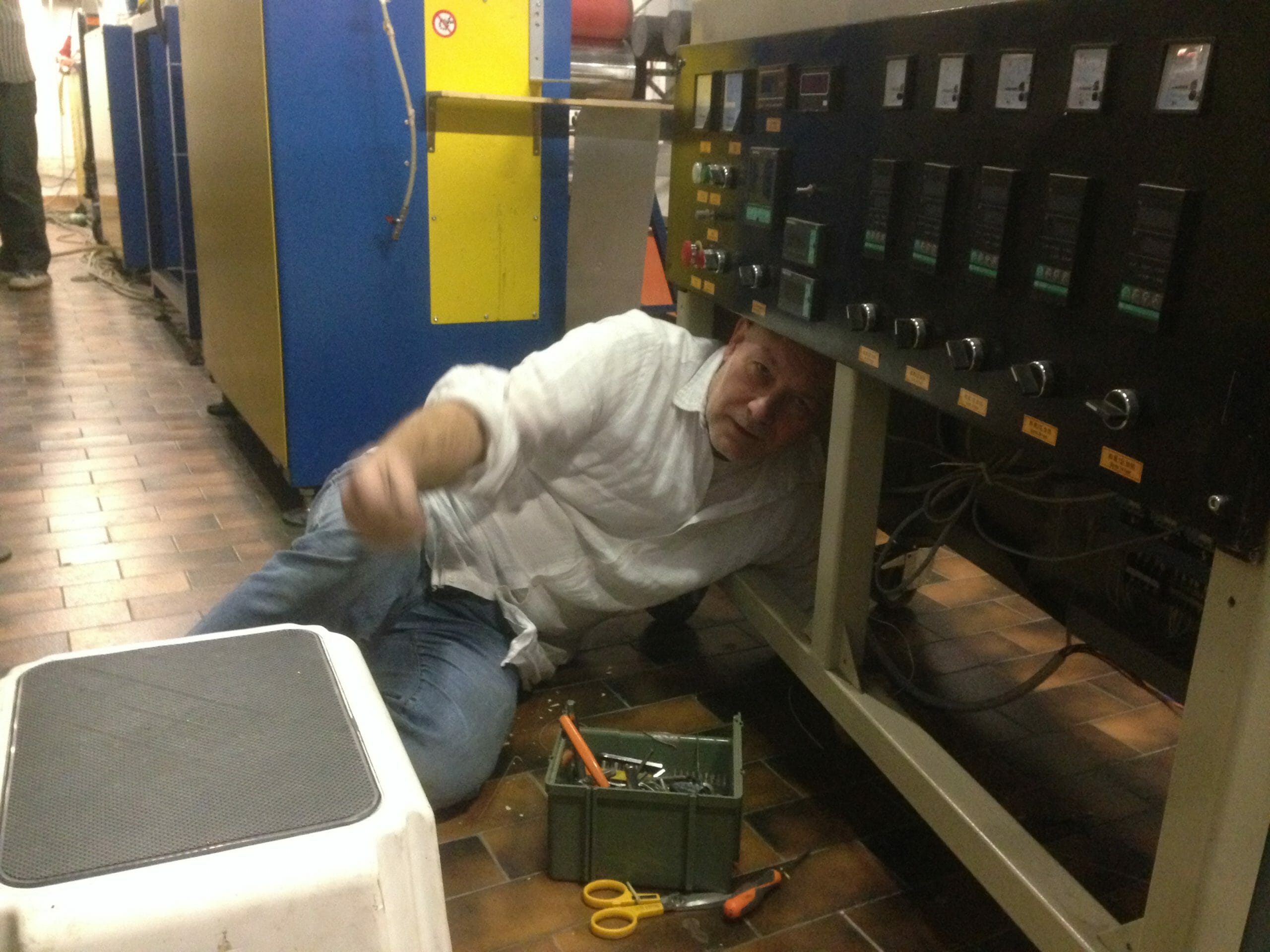 What is the relationship between a plain gut gauge and these new strings?

Very easy: they will be named CD types. so a 160 CD meant that it is a loaded string whose equivalent gauge is equivalent to a gut of 1.60 mm. Of course the real gauge is less but this do not matter to players, just the luthier that drill the  related hole diameter

How was the research process to make these strings, we know that you are already making similar strings (at least in color) for guitar (Rubino), ukelele or basses…What specific difficulties have you found in the lute world?

The lute was and is the most difficult instrument in the world and in all the ages and in all countries.  I have no space to explain better here. These basses has the same idea of the Rubino and ukulele Red Series but using very different materials and technological ways. I had in front of me a lot of problems to solve. I found nothing of  helpful in the web, nothing in the extrusion books, nothing from extruder experts.  For them to charge a plastic with a such quantiy was simply absurd and crazy.  You see: almost all of my life I have had people around sying to me that a certain thing is impossible to do, that I will lost time, money etc. I never heard such people.  I fell and hear  my inner shelf telling me: go ahead and do not care about them. Right now I have for example in aim to develop special loaded rubber strings for rochabilly double bass style and people are already telling me: ‘ mission impossible’.  This in my head has this reaction: yes, you can. 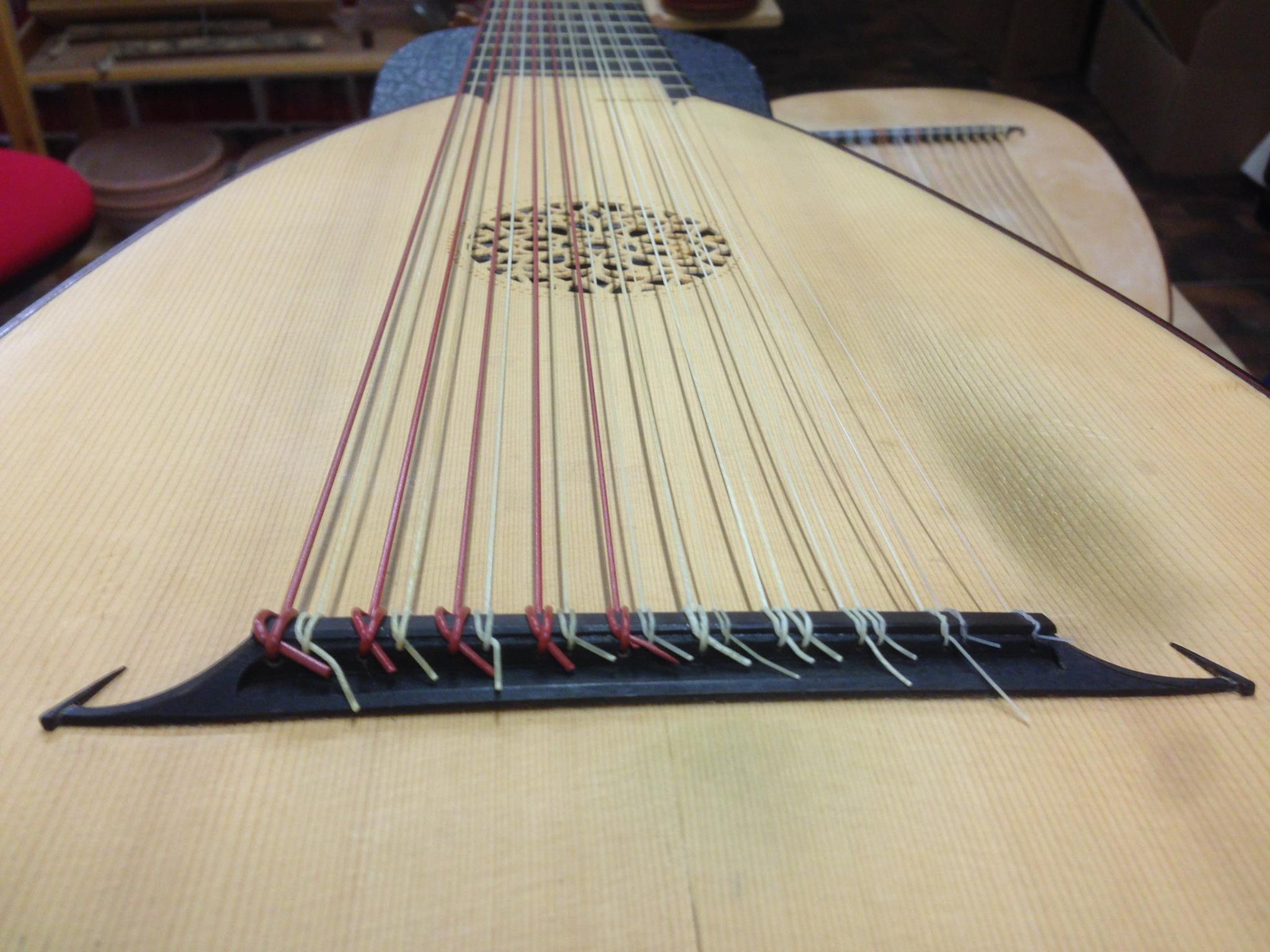 Are you going to continue the production of wounded nylgut strings Aquila-D?

Yes of course. People want them anyway. By the way: I am working hard to re-create the raw gut quality of the past years.  Some 6 years ago for example I was able to make in standard conditions gut lute 1st (not varnished) whose lifetime was around 1,5- 2 months.  I was never able to do that again due to the worst quality of the raw gut. Well, I like to do that again and make people happy. Thanks for your kind hospitality

Thanks for your time Mimmo. It’s been a pleasure to count on you for this interview.